What to Know About New York Dynamic Accessibility Symbol Laws

What to Know About New York Dynamic Accessibility Symbol Laws 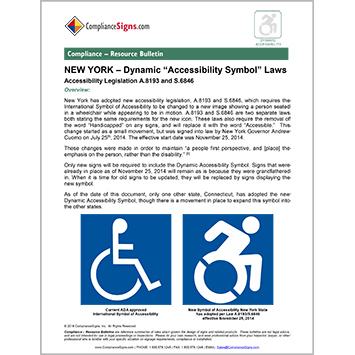 Our New York Dynamic Accessibility Symbol Laws Compliance – Resource Bulletin will help you understand some of the state’s rules and regulations that have been in effect since late 2014. Topics include:

New York has adopted new accessibility legislation, A.8193 and S.6846, which requires the International Symbol of Accessibility to be changed to a new image showing a person seated in a wheelchair while appearing to be in motion. A.8193 and S.6846 are two separate laws both stating the same requirements for the new icon. These laws also require the removal of the word “Handicapped” on any signs, and will replace it with the word “Accessible.” This change started as a small movement, but was signed into law by New York Governor Andrew Cuomo on July 25th, 2014. The effective start date was November 25, 2014.

These changes were made in order to maintain “a people first perspective, and [place] the emphasis on the person, rather than the disability.” [1]

Only new signs will be required to include the Dynamic Accessibility Symbol. Signs that were already in place as of November 25, 2014 will remain as is because they were grandfathered in. When it is time for old signs to be updated, they will be replaced by signs displaying the new symbol.

As of the date of this document, only one other state, Connecticut, has adopted the new Dynamic Accessibility Symbol, though there is a movement in place to expand this symbol into the other states.