A new National Safety Council report found continued remote work, increased focus on flexible work arrangements and mental health, and a renewed commitment to workplace safety to be among the most impactful workplace changes stemming from the COVID-19 pandemic. Based on in-depth interviews with safety, medical and health experts representing 13 industries, the State of the Response: The Future World of Work report also identified key factors business leaders must take into account moving forward.

The new report can serve as a foundation for organizations looking to navigate the post-pandemic world of work. Based on the findings, NSC developed a framework for addressing three critical issues moving forward: work modalities, such as how to address remote work and flexible schedules; worker expectations, such as investing in mental health resources and employee support; and work enablers, such as embracing technology to help augment job tasks.

The Future World of Work report is the third in a series of reports discussed on Dec. 10 at State of Response & Future World of Work Virtual Summit, presented by the SAFER initiative at the National Safety Council. Aimed at helping businesses, policymakers and leaders, some of the nation’s top experts on infectious disease response, workplace safety and business thought leadership discussed our national response thus far – where it succeeded and where it failed – and provided insights to prepare employers for what comes next.

One of the major themes discussed at the Summit was the need for COVID-19 vaccine guidance in the workplace. Business leaders are looking for direction around their role in vaccine implementation – from education to distribution. NSC will continue to provide employers guidance utilizing expertise from its vast network of partners, including the SAFER task force, to help them navigate the next phase of the pandemic.

The Bureau of Labor Statistics has developed new data on how U.S. businesses changed their operations and employment since the onset of the coronavirus pandemic through September 2020. Key results of the survey include: 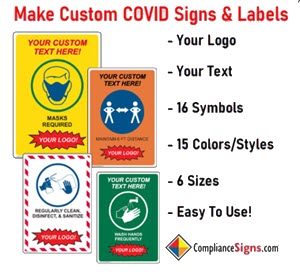 The COVID-19 pandemic has fundamentally changed many workplaces with new rules, roles and responsibilities. Creating customized COVID-19 and Social Distancing signs gives you flexibility to meet your specific needs – and reinforces your commitment to the safety of your employees.