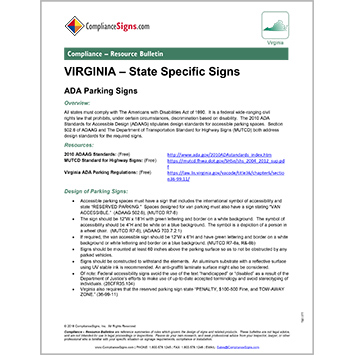 Our Virginia State-Specific Signs Compliance – Resource Bulletin will help you understand a variety of signage rules, regulations and requirements enacted in the state. Topics include:

The State of Virginia prohibits smoking in enclosed public elevators, public school buses, primary and secondary schools, hospital emergency rooms, health department offices, polling places, indoor service lines and cashier lines, public restrooms in government buildings and hospitals, child daycare centers except where located in a private home, and public restrooms of health care facilities. The law relegates smoking in restaurants (including bars) to separately-ventilated designated smoking rooms that are structurally separated from the rest of the establishment. Exemptions to the statewide ban are granted to, tobacco stores, cigar bars, and private clubs. The Virginia Indoor Clean Air Act went into effect on 12/1/2009 and requires the posting of signs at various locations. (15.2-2824) (15.2-2825)

The Virginia Department of Health stipulates the rules governing the use of public swimming pools and spas.

Virginia allows residents of the state to carry a concealed firearm (CCW) provided they have been issued a permit granted by the sheriff of the county in which they reside. Among the requirements for issuing a permit are; the applicant must be 21 years of age, has not been convicted of a felony, does not have a serious mental illness, does not have a conviction for an offense involving a controlled substance, and has completed an approved firearm training program. There are certain places such as, schools, courthouses, houses of worship, detention facilities, etc. where CCW is forbidden even with a permit. Virginia honors the CCW of a number of other states. (18.2-308)

The State of Virginia bans the use of hand-held cell phones for texting communications by all drivers of motorized vehicles. Drivers under 18 years of age and school bus drivers are banned from using any type of cell phone for all wireless communications. The law, 46.2-1078.1, became effective on 7/1/2007.