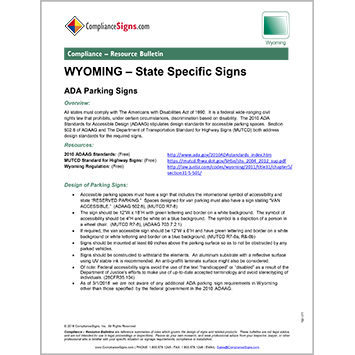 Our Wyoming State-Specific Signs Compliance – Resource Bulletin will help you understand a variety of signage rules, regulations and requirements enacted in the state. Topics include:

The State of Wyoming allows residents of the state to carry a concealed firearm (CCW) as long as they legally own a weapon in the state. No CCW permit is required. They may choose to obtain a CCW permit in order to be able to carry a firearm in other states honoring Wyoming’s permit. An applicant for a permit must at least 21 years old, has not been convicted of a felony, does not have a documented addiction to alcohol or a controlled substance, does not have a serious mental illness, and has completed an approved firearm training program. There are certain places such as schools, taverns, courtrooms, correctional facilities, law enforcement facilities, etc. where CCW is forbidden even with a permit. Washington honors the CCW permits of a number of other states. (WY Stat Sec. 6-8-104)

The State of Wyoming bans the use of hand-held cell phones for texting communications by all drivers of motorized vehicles. The law, 31-5-237, became effective on 7/1/2010.