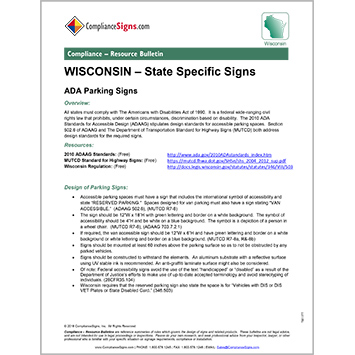 Our Wisconsin State-Specific Signs Compliance – Resource Bulletin will help you understand a variety of signage rules, regulations and requirements enacted in the state. Topics include:

The State of Wisconsin prohibits smoking in a public place or place of employment or within a reasonable distance of these facilities. The only exemptions to the statewide ban are for cigar bars, retail tobacco stores, and designated rooms in nursing homes. Wisconsin Act 12 became law on 7/5/2010 and requires posting of signs enforcing the law at various locations. (101.123, WI Act 12)

Chapter DHS 172 of the Wisconsin Department of Health Services stipulates rules governing the use of public swimming pools and spas. The code became effective on 8/1/2007.

The State of Wisconsin allows residents of the state to carry a concealed firearm (CCW) provided they have been issued a permit granted by the Wisconsin Department of Justice. An applicant for a permit must submit to a background check and complete an acceptable firearm training program. There are certain places such as courthouses, law enforcement facilities, airports, schools, etc. where CCW is forbidden even with a permit. Wisconsin honors the CCW permits of a number of other states. (175.60{7}) (175.60{4a, 9g})

Wisconsin bans the use of all hand-held electronic wireless communication devices for texting by all drivers of motorized vehicles. Wisconsin Assembly Bill 496 went into effect on 5/5/2010.