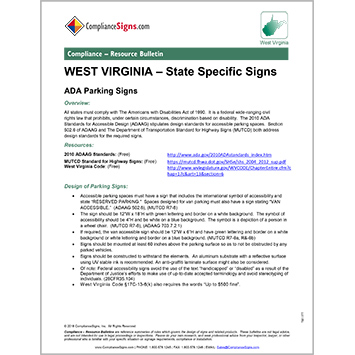 Our West Virginia State-Specific Signs Compliance – Resource Bulletin will help you understand a variety of signage rules, regulations and requirements enacted in the state. Topics include:

The State of West Virginia prohibits smoking in public schools, public transportation, mines, designated areas of nursing homes and bingo halls, and workplaces posted with no smoking signs. The state law went into effect in 2011 and requires the posting of signs at various locations. (8-27-10a) (21-3-8) (16-9A-4)

West Virginia allows residents of the state to carry a concealed firearm (CCW) without a license who is: 1) at least 21 years of age, 2) a U.S. citizen, 3) not prohibited from possessing a firearm under the provisions of this Section (61-7-7), and 4) not prohibited from possessing a firearm under federal law. (61-7-7) There are certain places such as, schools, correctional facilities, courthouses, etc. where CCW is forbidden even with a permit. West Virginia honors the CCW of a number of other states. (61-7-3,4) (61-7-11a)

The State of West Virginia bans the use of hand-held cell phones for both voice and text communications by all drivers of motorized vehicles. Drivers with learner’s permits may not use any type of wireless communication device while driving. The law, SB 211, became effective on 7/10/2012.