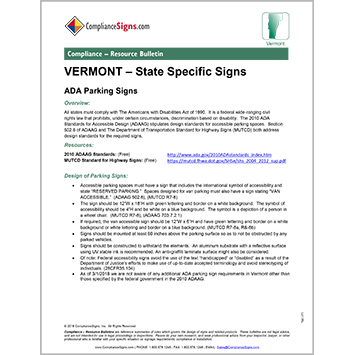 Our Vermont State-Specific Signs Compliance – Resource Bulletin will help you understand a variety of signage rules, regulations and requirements enacted in the state. Topics include:

The State of Vermont prohibits smoking in indoor public places, including restaurants and bars. Exemptions to the statewide ban are granted to the Vermont Veterans Home. The state law became law on 9/1/2005. The law is administered by the Vermont Department of Health. (37-1742)

The State of Vermont does not issue permits for the carrying of concealed weapons. Anyone in Vermont who can legally own a firearm may carry it concealed without a permit of any kind. There are certain places such as schools, court houses, etc. where CCW is forbidden. (13-4004)

The State of Vermont bans the use of hand-held cell phones for texting communications by all drivers of motorized vehicles. Drivers under the age of 18 may not use wireless devices for any type of communication while driving. The law, 23 V.S.A. § 1099, became effective on 6/1/2010.

Utilization of light frame roof and floor truss systems in buildings is widely accepted because it offers construction savings in material and labor. But their design can also pose a serious threat of collapse to firefighters during an emergency. The National Institute for Occupational Safety and Health (NIOSH) recommends that building owners post construction information, including the presence of roof and floor trusses, outside all buildings.

The Vermont Department of Public Health, Division of Fire Safety addresses the fire safety issues related to truss construction. This state law requires owners of commercial or industrial buildings to post a sign on the exterior of the building indicating light-frame truss-type construction. The sign assists firefighters in modifying their tactics when fighting a fire in a building with this type of construction.