OSHA Actions in First Quarter of 2020: $6 Million in Fines, a Prison Sentence, Contempt and Retaliation Charges

OSHA Actions in First Quarter of 2020: $6 Million in Fines, a Prison Sentence, Contempt and Retaliation Charges

Federal OSHA fines from January to March 2020 totaled $5,869,983. OSHA inspections resulted in 22 significant fines (over $100,000) in that period, as well as a 30-day prison sentence and a contempt charge. Fines ranged from $102,905 in compensation to a wrongfully terminated employee to just over $1 million for egregious fall hazards at a Florida roofing contractor. Dollar Tree was once again cited for violations at stores in several states.

The U.S. Court of Appeals for the 11th Circuit has found Great White Construction Inc., Florida Roofing Experts Inc. and owner Travis Slaughter of Jacksonville in contempt of court for failing to pay $2,202,049 in OSHA penalties. The final orders include multiple egregious, willful and repeat violations for lack of fall protection and other safety and health hazards at worksites in Florida. The court held the companies and Slaughter in civil contempt in January, ordering the companies and Slaughter to pay the outstanding penalties plus interest and fees, and requiring them to certify that they had corrected the violations within 10 days of the court’s order. If the companies and Slaughter fail to comply, they face jail time and other relief. OSHA has investigated the companies 19 times within the last seven years, resulting in 42 citations related to improper fall protection, ladder use, and eye protection. It recently slapped the company with an additional $1 million fine. Read more.

$1,007,717 and SVEP for repeat egregious fall hazards by the same Florida roofing contractor

OSHA again cited Florida Roofing Experts Inc., owned by Travis Slaughter, for failing to protect workers from falls at two work sites. OSHA initiated the inspections after receiving complaints of employees performing residential re-roofing activities without fall protection. Given the employer’s extensive history of violations, pursuant to OSHA’s egregious citation policy, the agency issued eight willful citations for failing to protect employees from fall hazards. “This employer has an extensive OSHA history with willful, serious, and repeat violations that has demonstrated an egregious disregard for the safety of their workers,” said OSHA. Learn more.

$605,371 for fall hazards by a Pennsylvania roofing contractor

$477,089 for exit, storage and fire hazards at a Wisconsin Dollar Tree Store

$371,276 for electrical, explosion and other hazards at a Delaware rail car tank facility

OSHA cited Dana Rail Care for workplace safety and health hazards after receiving a complaint of numerous safety and health hazards. OSHA inspectors identified electrical and explosion hazards, insufficient means of egress, use of defective powered industrial trucks, lack of medical clearance for respiratory protection use, improper use of respirators and inadequate secondary air supply and lack of signage in a silica-regulated area. This is the second time in recent months that OSHA has cited Dana Rail Care for safety and health violations. The company has contested that citation and the proposed penalties. Get more details.

$339,702 for multiple hazards at a Missouri charcoal manufacturer

$296,861 for exit and storage hazards at a Pennsylvania Dollar Tree Store

OSHA cited Cleveland Brothers Inc., doing business as CB HYMAC, for exposing workers to hexavalent chromium fumes and other safety hazards at the company’s shop in Camp Hill. OSHA cited one willful violation and 18 serious and two other-than-serious citations after receiving a complaint of overexposure to the toxic chemical. OSHA also cited the company for failing to train employees on the hazards of hexavalent chromium, and maintain a respiratory protection program. Review the citations.

OSHA cited CLF Construction Inc. and Toll Brothers Inc. for exposing employees to fall hazards after a CLF employee suffered fatal injuries in a fall at a worksite in Media, Pennsylvania. OSHA proposed $170,560 in penalties for subcontractor CLF Construction, and $74,217 for general contractor Toll Brothers. The employee fell 20 feet from a residential structure as he did framing work. OSHA cited Toll Brothers with one repeat violation for failing to ensure that the framing subcontractor provided employees with fall protection. OSHA cited CLF for one serious violation and two willful violations for failing to provide and require the use of proper fall protection systems, and not developing and implementing an accident prevention program to assist in identifying and correcting hazardous conditions during residential construction activities. See CLF citations and Toll Brothers citations. 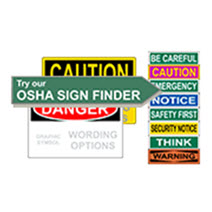 The ComplianceSigns.com OSHA Sign-Finder makes it easy to find just the sign you need. Select by sign header, wording, symbol, language, primary use and more. Our OSHA safety signs address dozens of topics, including chemical, electrical and industrial hazards.

All our OSHA safety signs comply with the OSHA 29 CFR 1910.145 standard for sign color and design.

$240,880 for hall and struck-by hazards by an Alabama roofing contractor

Jaime Martinez Hernandez was cited for exposing employees to fall and struck-by hazards at two Alabama worksites. OSHA conducted inspections in conjunction with the agency’s Regional Emphasis Program for Falls in Construction after investigators observed employees working from heights without fall protection at two locations. Citations include failing to train employees on fall hazards, allowing employees to engage in framing activities without fall protection and not requiring them to wear eye protection when using pneumatic nail guns. In addition, OSHA cited the contractor for allowing employees to use a ladder that did not extend at least 3 feet past the upper landing of a structure and use of the top step of an A-frame ladder. OSHA has inspected this contractor six times in the past five years, citing him for willful, repeat and serious violations for lack of eye and fall protection, and other fall-related hazards. Read more.

$228,592 and SVEP following a grain bin fatality in Nebraska

Interstate Commodities – based in Troy, New York – was cited for grain handling violations after an employee was fatally engulfed in a grain bin at the company’s Fremont, Nebraska, facility in September 2019. The company has been placed in OSHA’s Severe Violator Enforcement Program (SVEP). OSHA alleges that the company violated grain handling standards by allowing the employee to enter the bin without a harness and lifeline. OSHA cited seven repeat and 10 serious safety and health violations involving hazards associated with grain handling, falls, respiratory protection, powered industrial trucks and electrical safety. Review the citations.

The U.S. District Court for the Middle District of Florida, Fort Myers Division, has sentenced Stalin Rene Barahona – former owner of the now-dissolved SB Framing Services Inc. in Naples, Florida – to 30 days in prison. Barahona pleaded guilty to one count of willfully violating federal fall protection standards. In 2015, OSHA investigated after an employee fatally fell while doing construction work at a residence. OSHA cited the company for a willful violation for failing to ensure the use of a fall protection system, and a serious violation for failing to train employees to recognize potential fall hazards. Read more.

What Happens When a Company Doesn’t Pay its OSHA Fines? This Company President Found Out!